I am away this week in NJ and the beaches here are packed. There must be so many good finds and I have little time to detect. I won't give away all of my secrets in this post about picking out my beach to hunt among the many to choose from but in 2 hours of detecting I have found about $8 in clad and a ring (which has yet to be identified and wont happen until I return on vacation).

I knew that these beaches were hunted a lot by many different people with the best machines. But I also know that there are fresh drops daily since the beaches are packed. So, I got the beach early in the morning and looked around at the other detectorists. Nearly everyone with a high end machine was at the water's edge, which appeared sanded in even though I dont know this beaches terrain well enough to know that for sure. But I decided I wasn't hunting there. Also the water is still freezing, not even 70 degrees so I knew the finds would be little unless they were dropped there last year because people are just not in the water yet up here. Then I looked on the beach. The only people in the dry sand were people with low end detectors that were swinging several inches above the ground. These were the vacationers that bought a $100 machine and were having fun on the beach. I knew they would find those 1-4'' drops but everything past that was mine. Additionally, I knew they would clear out the freshly dropped trash for me, so I used them to my advantage. So I hunted in the dry sand only. I only hunt the dry sand when its strategic and in this case it was. I got barely any trash and it was all mostly freshly dropped clad in the 4-6'' range. In my first hour I had around 15 quarters and then I found a really nice ring - boom! I also noticed that the guys on the water edge with CTXs and Etrac's were not really digging at all. In fact, they just kept walking up the beach staying in the wetsand. So I went down just to check it out and couldn't get a hit. Back to the dry sand I went and I felt like I couldn't take a step without getting a good target. So don't always assume the wetsand is the best place to hunt and don't assume the guys out there have any clue what they are doing. Sometimes the dry sand is the place to be.
Posted by RP at 4:43 PM 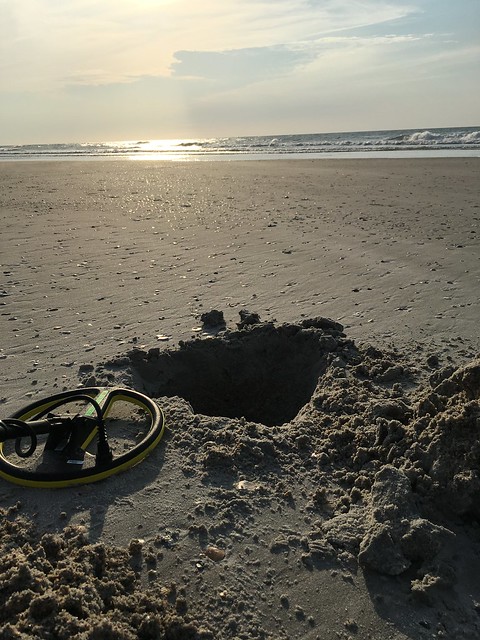